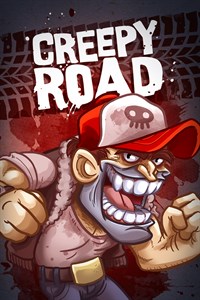 When everything goes insane and the world falls apart, a man must take up arms to protect his loved ones. Embark with Flint Trucker on a crazy journey to reunite him with sweet Angelina, and try not to succumb to the madness that awaits you! HUGE BOSSES Don't let their size scare you! Observe their fighting style, find a weak spot and show no mercy when you finally get your chance to attack. Go get "em, Flint! CRAZY WEAPONS Ranging from standard revolvers and shotguns to deadly contraptions with crazy and unexpected effects. You can even saddle a rocket to disintegrate flying enemies. The choice is up to you! BEAUTIFULLY HAND-DRAWN GRAPHICS For Creepy Road, we have created a truly mad world with over 30 original kinds of funny and furious enemies, from animals and birds to psychos. Most of them have their own original attacks too. Just try to defeat them all! All the locations contain original hand-drawn graphics, and each one has unique details, objects, and a memorable atmosphere. All the characters and locations were painstakingly designed with a great love of details! Main character Flint Trucker is a good guy with a rich inner life. Maybe he’s read The Alchemist by Paulo Coelho, perhaps he likes to listen to Tchaikovsky, and it’s possible he even goes to Dali's artwork for inspiration... He’s mysterious... but one thing’s for certain, he loves to destroy all who dare to stand in his way! Music Each location in Creepy Road is accompanied by an original musical theme, helping players immerse themselves in the atmosphere of what is happening and setting the rhythm of gameplay. The game contains more than 15 original musical tracks.